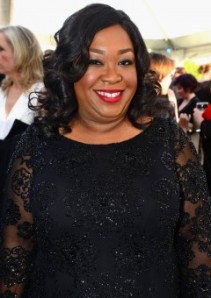 It is apparent that the Drama is on Thursday nights and it has all been orchestrated by the Fullfigured, Fabulous and paid Drama Queen herself Ms. Shonda Rhimes.

Shonda Rhimes’ studied craft is screenwriting and storytelling. Point Blank and the Period!   She earned her undergraduate degree at Dartmouth, and also holds a MFA from the University of Southern California – School of Cinema-Television. She is currently the only Producer in Television producing prime-time television on a major television network (ABC) since Aaron Spelling.  Now the Title belongs to ShondaLand.

I began watching Greys Anatomy because of the story line and then I found out that the creator of Grey’s Anatomy is a black woman named Shonda Rhimes. I immediately became excited about her work and the impact she was making on the landscape of prime-time television as a black woman.  I asked everyone…Do you watch Grey’s and if they weren’t I would ask them are you living under a rock.  Now, Grey’s Anatomy and Scandal have become a staple in over 10 million households per Thursday night despite the viewer’s skin color.   And now we have,  How To Get Away With Murder Created by Peter Nowalk and Executive Produced by Shonda Rhimes to add to the Frenzy that is ShondaLand starring Viola Davis as Law Professor Annalise Keating.

I am happy glad proud of the success of Shonda Rhimes.  It gives me hope because young black boys and girls have another living legend to look up to in the entertainment, film writing industry.  Young thick girls can feel great about themselves and be a BOSS just like Shonda Rhimes.

Tune in Tomorrow Night to ABC’s Night of Drama with Shonda Rhimes as She Take over Thursday Nights and has the world at their fingertips.  #TGIT

LOVE YOU WITH THE LOVE OF THE LORD JESUS AND THERE AIN’T NOTHING YOU CAN DO ABOUT IT! TTYL and DON’T FORGET TO SUBSCRIBE, REPOST, COMMENT AND SHARE!

© 2014 Rhenotha Whitaker Full Figured Fabulous & On The Way To Fit